VEILSPACE
One of the original propositions of this article is that we cannot comprehend a reality that lies beyond our geometry. We have proposed a space occupied by limitless veils.  Veils are described as planes with mass but no thickness.  This article will explore the kind of space the veil inhabits.
First, what do we mean by dimension? Commonly, it refers refer to length, width and depth. Here though, we define dimensions as harmonics on a glissando of being. In music, a glissando is a glide from one note to another, such as a trombone or violin may make.  In the universe of the veil, a line exists on its own glissando. It can be straight or twisted up into a plane. It does not know what a plane is. All it knows is that it exists, has length and shape. It also has mass. We refer to this dimension as 1+ .
When a line has become twisted enough to fill a space, it enters another glissando, that of the plane. The plane is not restricted to being flat. It can be twisted. The plane can exist anywhere from flat to space filling.  We have described a manner in which this can be done. The plane has mass but no thickness. This dimension will be called 2+ .
A plane can be twisted until it fills a space. It infers an infinitely dense point center. The center leaves the realm of the veil and is what we consider solid matter.
In defense, I know of no truly straight lines, nor flat planes. Our understanding of reality indicates that whatever constitutes solid matter is just subatomic particles. Subatomic particles are not solid at all.
We begin this exploration by examining spirals.
SPIRALS AND SPIRALOIDS
The unit of the universe is the spiral.  In its many manifestations, the spiral permeates reality, from the tiniest particle to the largest galaxy and perhaps beyond. The DNA molecule is a double helix. Many plants exhibit spiral growth patterns. The motion of the celestial bodies is spiral in nature. 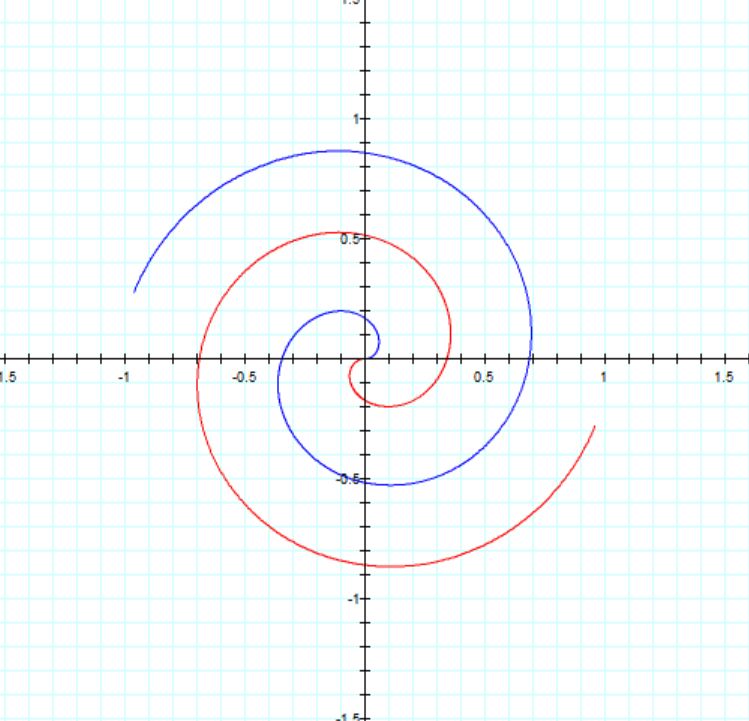 Figure 1. Full Spiral.
Blue is for positive values. When we add the negative, we get the red companion. Together they form a continuous path, a full spiral. The radius is only a number chosen for illustration, it could be infinite. The number of twists are determined by n and can range from virtually straight line to filling a plane.
TYPES OF GROWTH
Spirals can increase their number of twists in two ways. In the first, the figure on the left, the ends move to add rotations. In the second, the ends stay put and it is the center which rotates. 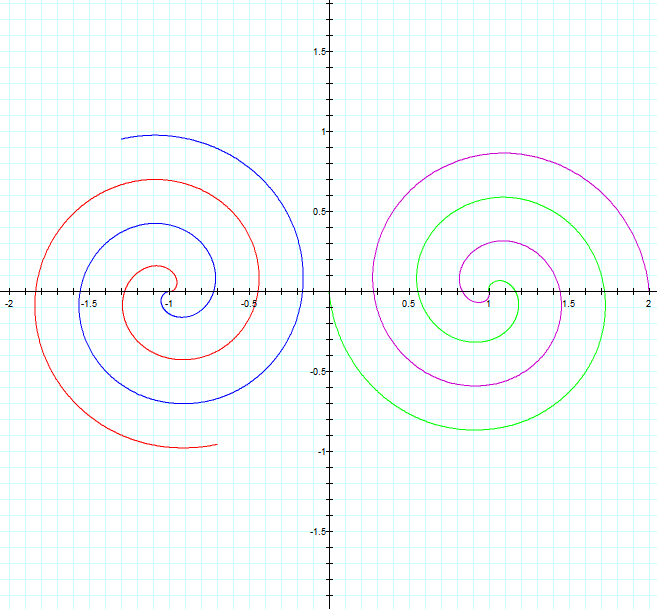 DAISY CHAIN
Spirals offset along the x axis can link up at particular values of n, in this case 4. Taking this as the base link, we can link them together to daisy chain as far as we wish.

Figure 3. Daisy Chain
Note that the Daisy Chain has a reverse also, its mirror image.

Figure 4. Reverse Daisy Chain
These illustrations showed the spiral at particular degrees of rotation. There can be many more rotations. The radius is unlimited. It may expand at regular intervals with the radius growing by fixed increments, as in these illustrations. That is not required as the radius may grow in different patterns.

Figure 5. Frequency and Amplitude.
If taken to the extreme, where each wrap contacts the previous one, the spiral could fill a flat space. The spiral would then transition from linear to a planar figure.
FLOW
The daisy chain of spirals can be constructed from a single line. With the ends connecting and the centers rotating, its twistedness could flow along the line from one point to another. As such, it can be considered a dynamic entity. Figure 6 hints at this. 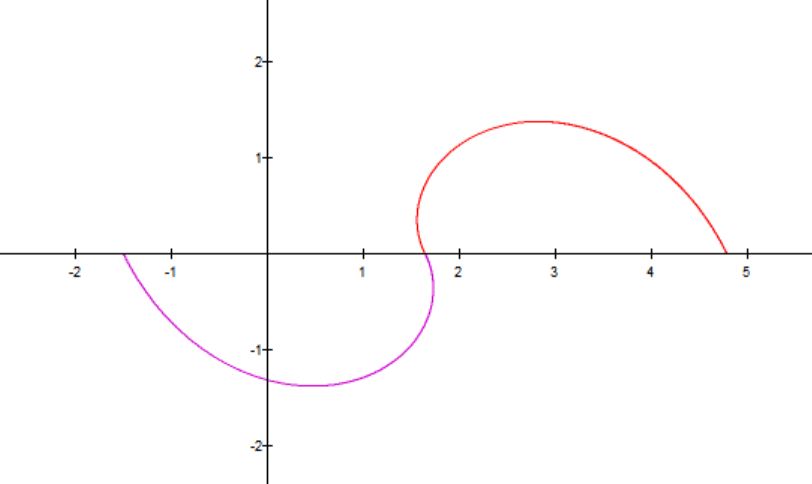 VEIL
We have said that the veil is a twisted 2d plane seen from a 3d point of view. The first question posed was, what happens if we drive a circle above 360 degrees? We modeled that using paper circles, adding more and more.  We used that to develop forms we now call the spiraloid.
SPIRALOID:  A surface defined by a radius spiraling about a central point. It may be self intersecting but not self crossing.
(In the past we referred to it as the saddlemnicus (a 3d lemniscate) or saddle for short. Spiraloid is more in line with the accepted terms helicoid and catenoid.)
It exists somewhere between the second and third dimensions. It is still a plane and not quite a solid. The upper limit is a sphere. That happens when enough circles are added so that all the points on a sphere are covered.  Note that we have hypothesized a solid point center, the nexus, at its maximum density (see Density Difference ).  The term "spiraloid" will now be used for this general class of figures we have been discussing in the Unit of Universe series.
In this particular configuration, the edge spirals from pole to pole. To avoid confusion with the common flat 2d spiral, let's call this form the spherical spiraloid.   Like any spiral, it can spin CW or CCW. The top view projected onto a plane, is the spiral form as above. That spiral extends from the pole to the equator. The figure shows CW above the equator and CCW below. The CW and CCW meet at the x axis. The positive and negative meet at the y axis (Note: It is the y axis in this Solidworks drawing. Other systems may call this the z axis.) 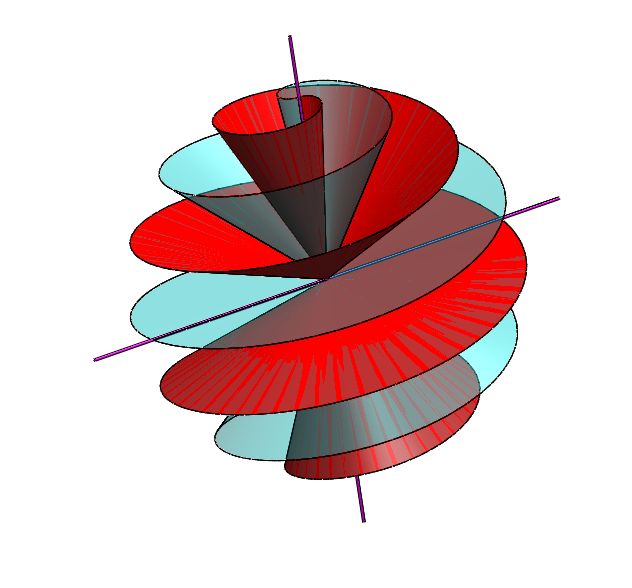 Figure 7. Spiraloid of 2,880 Degrees
VEIL AS A SPIRAL
We can also draw a spiral on this veil as it winds around, similar to drawing a spiral on a flat sheet. As above, the spiral has the ability to fill the surface of the veil. The veil can now be viewed as being composed of a compact spiral, a line spun out of the center. That line itself can daisy chain, adding twists upon twists upon twists. 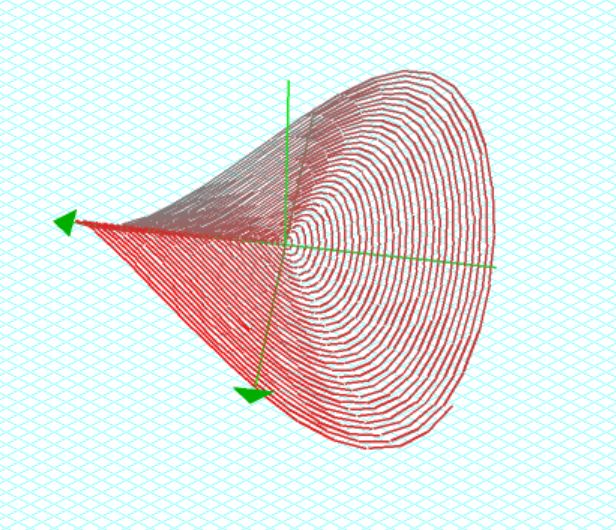 Figure 8. Spiral on a Tetrahedral Spiraloid.
ENERGY
We can now offer a geometry of energy. The scientific work of the past has produced a great understanding of how it can be generated and used. Yet we have no clear understanding of what is its nature.
Here we propose that twistedness of the spiral is the root of energy. Energy is twistedness. Its nature is linear in its origin. As the twistedness is relieved in one location it is accepted at another. Its untwisting is the root of force.
This daisy chain of twisted spirals can extend from a donating spiraloid to a receiving one. This is the rail, like an umbilical cord unraveling from the donating veil's spiral. It need not be straight, but take the most likely path from one to the other. Everything is in motion. The donating one and the receiving one are moving relative to each other. So is the connecting cord. The twistedness is moving along the cord also. When it reaches the end of the rail at the receiving entity, it revolves about itself in the manner of the conch. 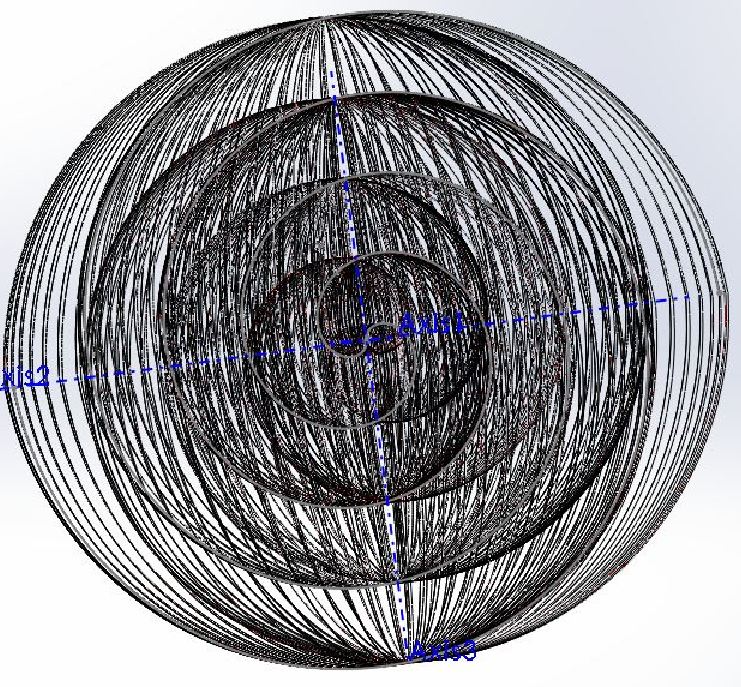 Figure 9b. The Conch
The spiraloid has a center.  The veil, as it has mass but no thickness, reaches infinite density at its center. Now I propose that when the S at the center becomes overburdened, it can release the excess through the rail. It does so in the manner above. In the article in this series, The Atom,  we expound that there would be a boundary layer between nexus and veil. We called it the soup. This is where the conch exits.
When the rail connects with a receptive companion, the link has no further to go. It then begins to spin about its axis, the originating line at the point of contact. This resolves as the conch, which is a rotated spiral. The section of the conch shows that same spiral.
WAVES
The spiraloid can also expend energy as a wave. Only half the S is shown for clarity. 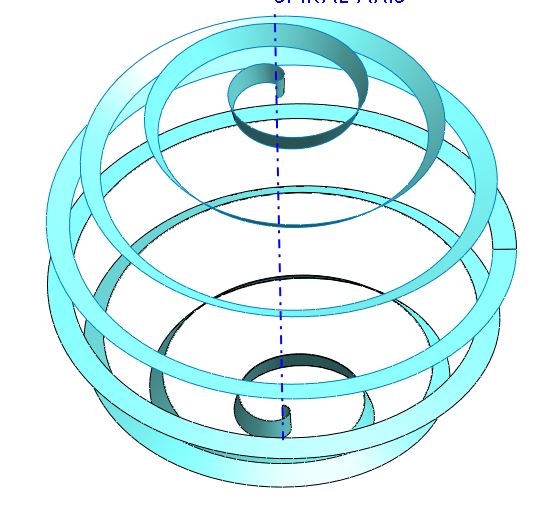 Figure 10. Wave
LIGHT AND DARK ENERGY
Adding figures 4 and 5 together we see them as opposites. Our world is built of the one and not tuned to perceive the other.

Figure 11a. Light and Dark as they emerge from a line. 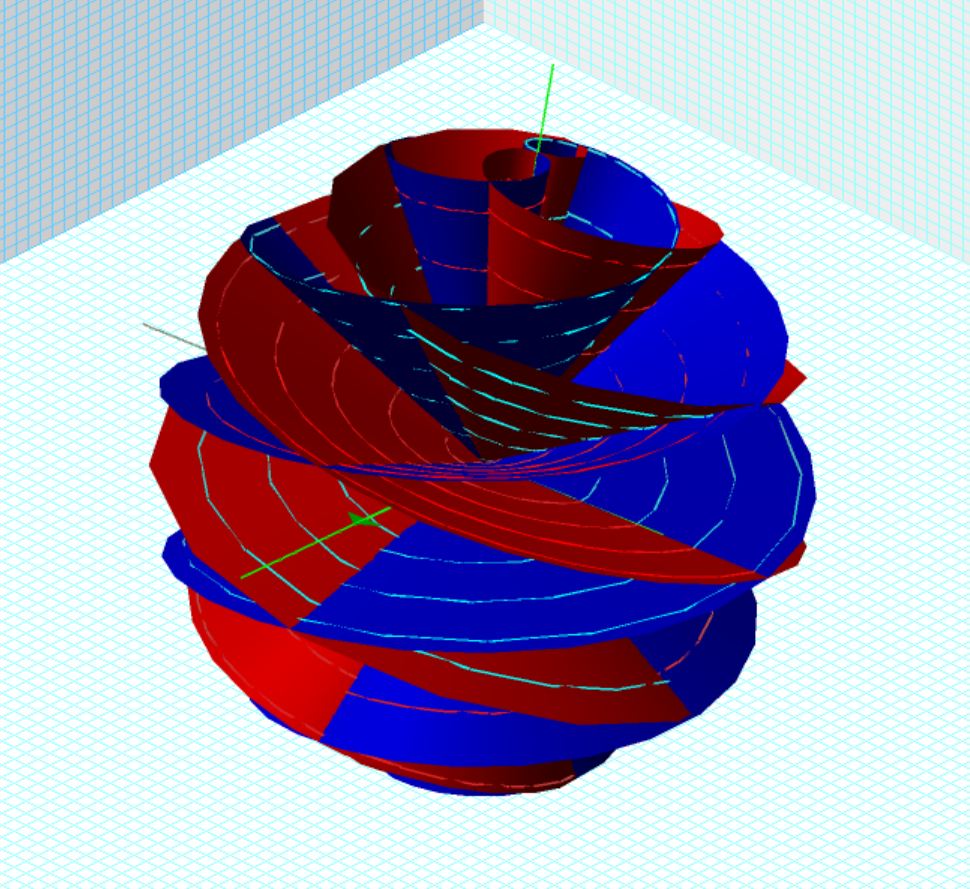 Figure 12. Spirals on a Spiraloid
WHAT'S THE POINT
We have developed the sequence; spiral line, spiraloid veil, nexus. But what occurs before line? A spiral has an origin, a point from which it emanates. The point is less than one dimensional, having no length. This infers a 0+ dimension, ranging from nothing to point. The nexus is also described as a point. The sequence might equally begin with it, spiraling out to create the veil. We went for centuries never knowing about ultraviolet and infrared. Maybe being us in our kind of reality makes us blind to a different kind.
Veilspace is a universe of spiral webs, spinning out from their central points. Veilspace is reality's harmonies, dancing to song of God.
September 2019
NOTE: All illustrations and animations in this article are equation generated by the author. Only the equations for figure 2 are given here. Others are available upon request.